All About Freon: A Molecule Associated With Your A/C Unit | Great Dane Heating & Air Conditioning Skip to content

All About Freon: A Molecule Associated with Your A/C Unit 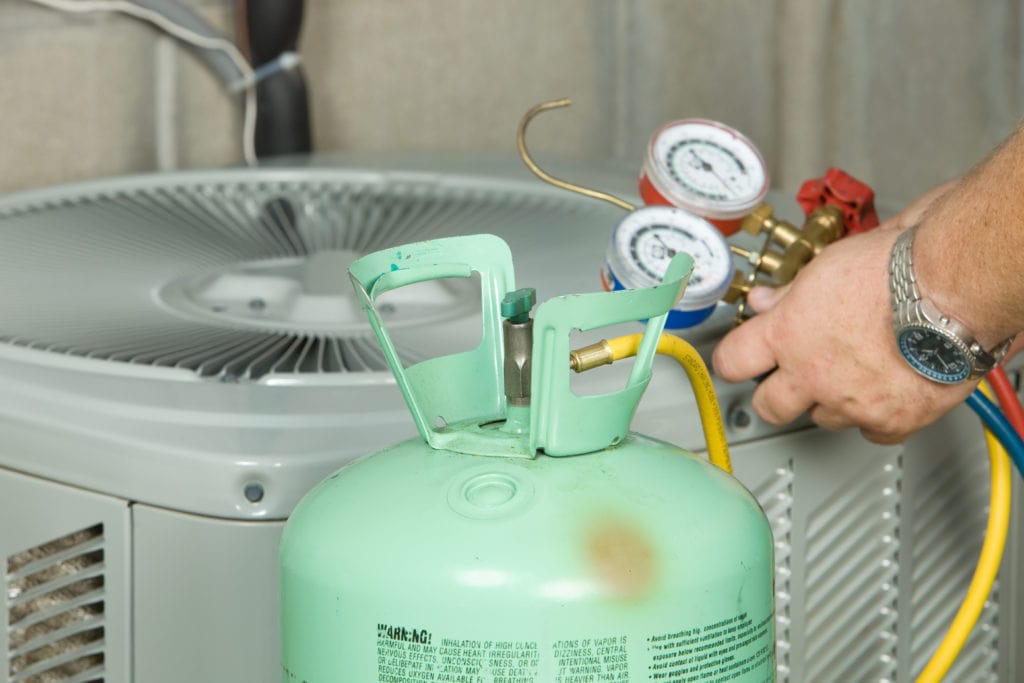 Like most people, you use your A/C unit to combat the warmer weather. However, few consumers actually know about Freon, one of the possible molecules acting as a refrigerant. This particular refrigerant helps produce colder temperatures around the condenser coils to cool air and lower the room temperature. A/C unit manufacturers are working to phase out the use of Freon because of its linkage to ozone depletion. If your A/C unit still uses this product, you need to read on to learn more.

Freon also referred to as R-22, is a chlorofluorocarbon (CFC) invented in the 1930’s. It’s not only odorless but also non-toxic, which made it a popular choice for appliances used in homes during that time. In addition to A/C units, chest freezers, cold storage rooms, and dehumidifiers also utilize this gas.

A/C units rely on some type of refrigerant to cool the air circulating. Inside your A/C unit, Freon is compressed to produce a hot temperature. The hot gas then travels down the coils to cool into a liquid. This liquid absorbs the hot air from the outside of the unit, and the A/C fan then pushes the cool air into the surrounding environment.

Scientists discovered Freon was detrimental to the ozone layer in the 1970’s. Since this discovery, they have linked it to global warming. Freon is most harmful when leaking from appliances, such as an A/C unit that tends to overwork in hot climates. If an A/C unit is unable to blow cold air, a coolant leakage is often the culprit. Because of this hazard, the United States stopped producing appliances this toxic chemical as a refrigerant in 2003, with appliances produced after this time using an alternative molecule as a refrigerant. To guarantee a reduced reliance in the United States, legislators passed The Montreal Protocol, forcing manufacturers and consumers to reduce consumption by 90 percent.

Although the US dedicates itself to diminishing Freon reliance in appliances, thousands of older A/C units and freezers that still require it. The biggest concern with Freon usage is the potential destruction of the ozone layer, which leaking appliances often exacerbate. If you are concerned about your A/C leaking coolant or are wondering if your unit uses a dangerous toxin, Great Dane Heating & Air has several trained professionals happy to help. Give us a call today at (866) 488-3263.